At the beginning of November, the square on the corner of Turnergasse / Dingelstedtgasse in Vienna’s 15th district was named after Moshe Jahoda at a celebratory event. Present at the occasion were numerous guests of honor of the city of Vienna, the district, the Jewish Community, from Jahoda’s family from Israel as well as companions, colleagues, residents and friends. At the same time, the events of the November Pogrom in 1938 were remembered. 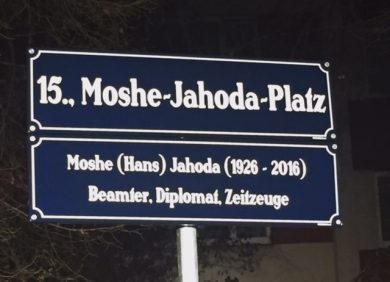 The naming of the square at the site of the Turner Temple memorial took place on the initiative of the district council. Moshe Jahoda was born Hans Jahoda on May 11, 1926, in Geibelgasse in Vienna’s 15th district. His grandfather, Simon Brück, was an honorary servant in the Turner Temple, where Moshe Jahoda himself sang in the choir. As a child, he witnessed both the violence towards Jews and the destruction of the Turner Temple during the November Pogrom. As a 13 year-old, he was able to flee to Palestine on a Kindertransport in 1939. His parents and younger sister were deported to Theresienstadt in 1942 and murdered in the Auschwitz concentration camp in 1943.

Throughout his life, Moshe Jahoda was involved in many ways, both in Israel as an officer in the founding of the state, and in his civil career. The compensation of Shoa victims worldwide was of special concern for him. He led the Claims Conference for Germany and Austria, was a member of the board of trustees of the Austrian Future Fund and honorary curator at the National Fund. In the 15th district, he played a key role in the erection of a memorial on the site of the Turner Temple.

Article by S. Trauneck “Memories of Moshe Jahoda”, booklet published by the Herklotzgasse 21 project: The Austria of Two Faces. MosheJahoda_InErinnerung (in German)