The journalist Olga Kronsteiner was awarded the Leon Zelman Prize for Dialog and Understanding 2020 in September at Vienna City Hall. The prize was presented by Vienna’s City Councilor for Cultural Affairs Veronica Kaup-Hasler in the City Senate Chamber.

“Reconciliation, a willingness to enter into dialog, remembrance – these are the great topics of Leon Zelman, who founded the Jewish Welcome Service nearly 40 years ago. It was an initiative that took it upon itself to invite Holocaust survivors and their descendants from around the world to our city, to learn about contemporary Vienna as it is today.

The journalist Olga Kronsteiner is this year’s winner of the Leon Zelman Prize. She weaves her stories entirely in the spirit of the person after whom the prize is named – with commitment, compassion, expertise, sophistication, and precision. Whether restitution, the modern art trade or cultural politics, she calls things what they are without beating about the bush and, if there’s any doubt, always comes down on the side of art. The Leon Zelman Prize is a mark of appreciation and respect for a journalistic oeuvre with an unmistakable, socio-political standpoint. For that reason alone, it is indispensable,” City Councilor for Cultural Affairs Veronica Kaup-Hasler congratulated prize-winner Olga Kronsteiner. 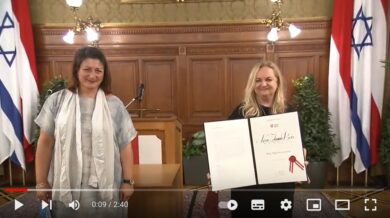 In his laudatory speech, the publisher and author Benedikt Föger remarked:

“Olga Kronsteiner is filled with an almost anachronistic yearning for decency in politics and society, and resistance to everything that contradicts this decency. The ravages of National Socialism and the subsequently inadequate way they were dealt with became a kind of journalistic life topic. She also always focuses on thorough, not to say meticulous, research, solid background information and her deep specialist knowledge to clarify her positions and highlight relationships based in fact.”

“With Olga Kronsteiner, it’s not just about the beacons of art restitution but also about the little everyday objects that made up a life that was snuffed out. Nowadays, these objects often form the only concrete basis on which to remember murdered relatives.”

“Olga Kronsteiner can draw the whole big picture, highlight the historic and social context, using a single detail – whether that be a cigarette case, an art object the size of a thumb, or a sentence from a letter.”

“I am delighted about the recognition of my journalistic work. I see it as a form of resistance to forgetting. My goal is to heighten public awareness of the Shoah and its consequences. There is still much to do – today more than ever,” said Olga Kronsteiner in her acceptance speech.

The prize has been awarded since 2013 to people or initiatives that are actively committed to the memory of the Shoah and the dialog between today’s Vienna and the victims of National Socialist persecution and their descendants. The prize is endowed with 5,000 euros and donated by the City of Vienna.